The classic, controversial play by David Mamet of a power struggle between a University student and her professor. 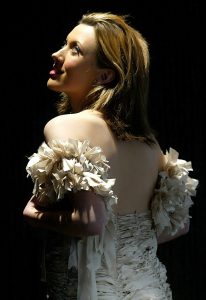 Full of tension and fascinating character revelation… Hastings is a marvelous Carol, a complex creation whose cause comes first, mercilessly turning the knife. Mamet’s coruscating play is in good hands here.

Oleanna packs a powerful punch… Hastings is very good as the student, whose vulnerability draws out the professor, but whose agenda strangles him… both actors are understated and their performances have a cinematic intensity.

Hastings successfully negotiates the transition from a nervous, insecure student to a confident, articulate young woman.

The world premiere of a new play set in Dublin during the week of the moon landing in 1969. It was developed by The Royal National Theatre Studio in London and staged at The Northcott Theatre, Exeter. 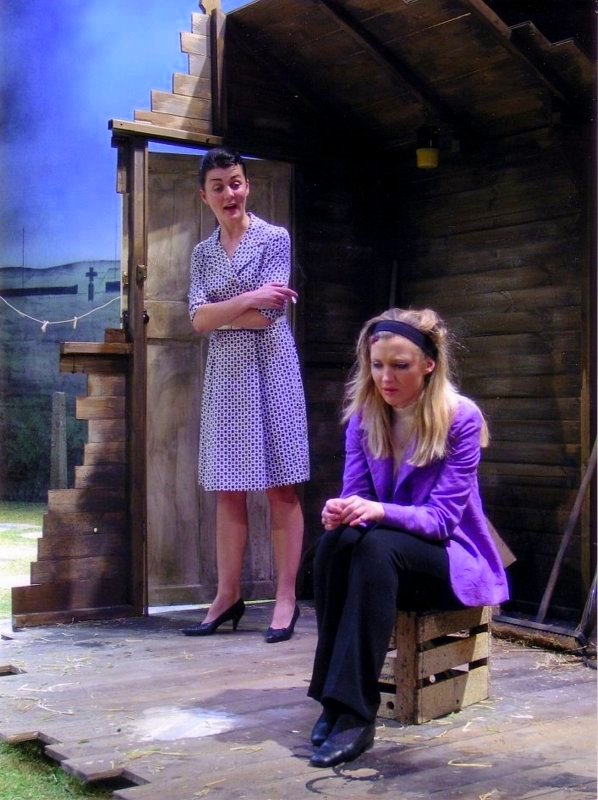 Lin Coghlan’s challenging play offers great scope for its actors… this world premiere is played out with raw and powerful emotion.

It is a curiously affecting play which refuses to be dismissed from the memory… Eva Bartley and Amy-Joyce Hastings tenderly evoke the flowering of forbidden love in the shadow of violence.

The pick of the performances were very good. Amy-Joyce Hastings as Aisling’s worldly friend Maggie brought to the stage the palpable excitement of her stay in London.

There are some fine performances…Maggie (Amy-Joyce Hastings) has already tasted a new life in England and sees it as a new dawn.

The world premiere of a new 3 Act play commemorating the 100 year Anniversary of the Sinking of RMS Titanic. An Ovation Theatre production performed at the Gatehouse Theatre, Highgate, London.

Director John Plews allows his gifted ensemble the time to invest intimacy into their characters… Amy-Joyce Hastings is an assured, tricksy servant, while Jamie Partridge sparkles as a diamond-hungry womaniser… it’s a tribute at London’s highest theatre above sea level that you need to look out for.

The play is simple and clever, built around the everyday interactions of a group of crew and a competing set of First Class passengers on the top deck… Funny? Very. There are many interesting scenes exploring sexual politics – men constantly using, or crossing the line with women. The cast is split between those that shine… Amy-Joyce Hastings is playfully knowing as thieving maid, Violet Jessop… an absorbing two hours of drama… a play that entertains, informs and intrigues. The ending is very poignant.

Rip-roaring farce as well as a tale of thievery and female exploitation… Fleet’s exploitation of gullible First Class cabin maid Violet (Amy-Joyce Hastings)… The Titanic tragedy is a microcosm of class distinction and at times this script offers a moral message as clear cut as Oscar Wilde in his social satires and, like him, wraps much of it in humour… After the interval, the situation and the play become more serious as the characters take to the boats and the tragedy plays out… John Plews’s production manages the change of mood without flattening the strong character playing. And its very simple staging has a powerful effect… the hardworking cast do sterling work… peopled their play with characters whose parallel personal stories hold the interest irrespective of being on the Titanic… When the supposedly unsinkable ship hits the iceberg, the seriousness behind the humour becomes more poignant.

Some truly magnificent moments… fascinating and poignant… very effective… Credit definitely has to be given to the cast of nine who not only gave wonderful performances… This piece is certainly an example of ensemble acting at its best and to call this cast hardworking is an understatement… with scenes in the lifeboats being a glorious example of how brilliant fringe theatre really can be… the sheer intimacy achieved here… is beyond anything you could experience in commercial West End theatre and something truly magical… goes from strength to strength… bringing the production to a perfect end… as perfect an end that a play about the greatest maritime tragedy of all time can have.

Amy-Joyce Hastings’ Violet was lively as the thieving servant in thrall to Fleet who managed to survive three nautical accidents.

– What’s On the Fringe 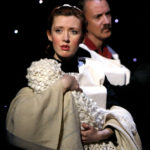 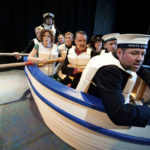 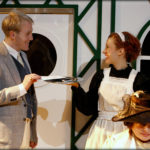 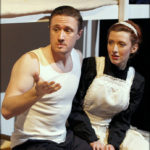 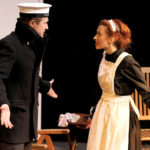 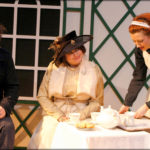 When the survivors take to the lifeboats, things come together nicely… it is very moving indeed. Things are helped by some fine performances… all the cast are good, and director John Plews has worked wonders with limited resources.

Neatly evocative… a melodramatic semi-comedy, embroidering real characters… Stewardess Violet Jessop pilfers silverware and trinkets (theft onboard is supported by divers’ trophies, though not incriminating the real Jessop)… soberly fascinating, not unenjoyable though.

All the crowd-pleasing ingredients are there – writer Chris Burgess wisely homes in on a microcosm of social types from the crew and passengers… Fleet (Matthew Walker) is a Scouse chancer stringing along a devoted first-class stewardess Violet Jessop (Amy-Joyce Hastings) who nips around nicking valuables from the toffs at Fleet’s bidding… A night to remember.

John Plews and his Ovation theatre company show considerable chutzpah in launching this new play by Chris Burgess following the real-life experiences of 9 passengers on the ship’s ill-fated maiden voyage… The second act, showing the passengers’ desperate evacuation, is particularly effective: two lifeboats face the audience, enabling the actors to observe the sinking ship as if off-stage.

Clever writing brings new insight to the Titanic story. Chris Burgess’s script succeeds mainly by exploring real-life characters and highlighting the class and gender differences during the period. It is an involving story, directed by John Plews, and the performances are faultless.

There is far more historical accuracy here than elsewhere. The characters aren’t dreamed up, they were real people on board the RMS Titanic back in 1912. There is some artistic licence, a storyline of the posh and the poor confusing themselves over love and wealth and all the things that divide them, which builds nicely… Given we all know what happens in the end – the boat sinks – there is a curiously chilling, prickles-on-the-neck ending. 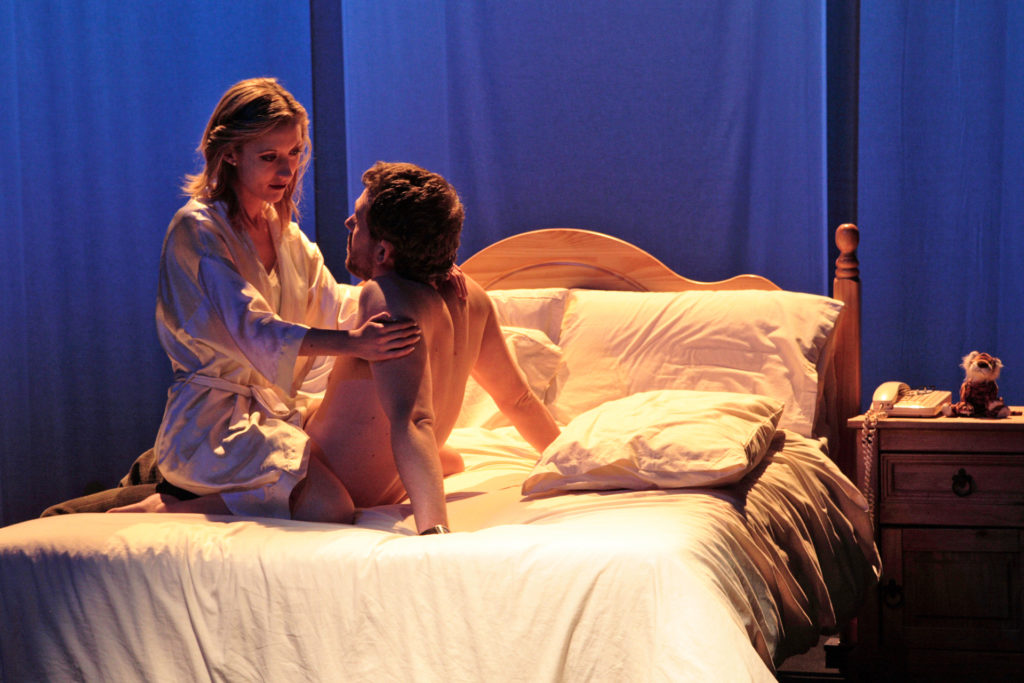 The acting is sensitive and apt… Hastings brings a likeable humanity and strength to the spurned Miss Perfect… including a lengthy, sad yet funny sex scene… An enjoyable, insightful production of a taut and tender play.

Real people grappling with their own weaknesses and moral confusions. Here Steve Gunn (David) and Amy-Joyce Hastings (Cathy) inhabit their roles with conviction, making it easy for the audience to connect with their dilemmas. 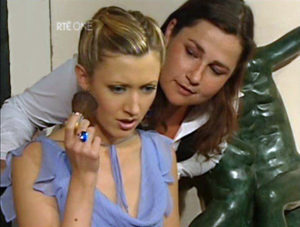 The existentialist classic by Jean-Paul Sartre about two women and a man trapped in Hell together. AC Productions at Andrews Lane.

It works best as a showcase for their talents…three very different parts and all of them excellent! …Interesting and it stayed with me… there were laughs – you feel very good about life when you leave it. 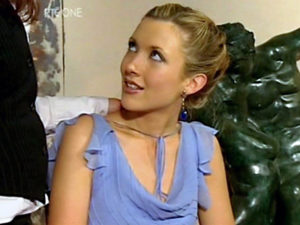 Premiere of the theatrical debut of award winning poet Noel Duffy, set in New Hampshire and tracing the fallout amongst friends & family after the death of a girl by heroin overdose. 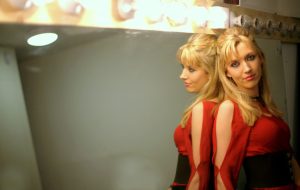 An adaptation for stage of the movie, Swimming With Sharks is a biting black comedy about the darker side of Hollywood. 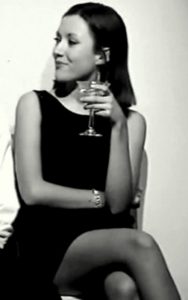 The acting is strong and convincing, and Amy-Joyce Hastings and Eoghan McLaughlin do well in supporting roles.

To have faith restored in contemporary theatre is a wonderful way to leave a play… as the curtain falls the superb directing and energetic acting all linger for a long time afterwards… done with style, wit, panache and balance… Jessica Curtis, Deborah Wiseman, Amy-Joyce Hastings and Sean O’Meallaigh make up the ensemble… Combining movement and classical drama, the play also uses the pantomime method to great effect.